The diversity of the cuisines at the Dolphin Mess at Magis Block seems to reflect the diversity of the students of St Joseph's College (Autonomous). Students come there to not only enjoy familiar cuisines but also to discover those of other cultures.

And manager Raju N Pujari, along with his team of 20, caters to the needs of hundreds of them daily. The menu, which has North Indian, South Indian and Chinese dishes, changes daily to keep things interesting. The head cook starts cooking from as early as 5 am.

Raju said the canteen uses the best­quality raw materials bought from the City Market, and maintains the highest safety standards while cooking. He, however, had an appeal for the students who come to eat from the mess. “The students often throw waste outside the designated bins [meant for waste segregation] and some also mix organic wet waste with inorganic dry waste, causing a lot of inconvenience, ” he said. He appealed to the students to take waste segregation seriously, especially keeping in mind the Swachh Bharat campaign. 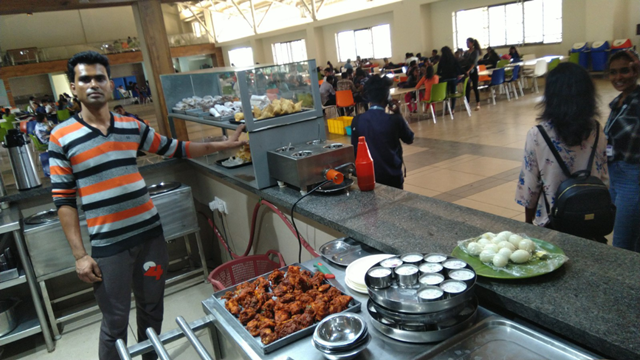